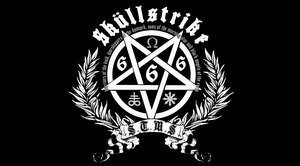 Here’s an upstart alternative clothing brand you should put on your radar. Sküllstrike just launched and they only have three products to sell at this point: a T-shirt (which is already sold out), a hoodie, and a beanie (in the U.S. Army we called them “skull caps,” which seems appropriate here). Color choices are limited to black with white screen printing, except the beanie that has a stitched-on patch reading “Skum” and features four studs (the beanie can also be customized).

Officially, the upstart describes itself as follows:

Sküllstrike is an indie brand deeply influenced by the occult, the void, and the holy gracious d-beat. Even though we’re influenced by this, Sküllstrike keeps an open mind towards everything that surrounds it, being present in the streets instead of targeting shops themselves. Sküllstrike has the purpose of being something made by its public for its public, aiming to differ from others by being actually close to those who wear us.

If you dig what you see here, keep up with Sküllstrike on Facebook, Instagram, and at skullstrike.bigcartel.com.

Check the Sküllstrike site for sizes and availability.