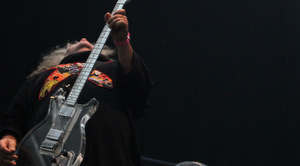 KISS: If they were just image, no one would care

If you’re a Melvins fan, then you know that there’s a big KISS connection. Emulating the KISS solo albums from 1978, the Melvins released three solo EPs in 1992 called King Buzzo (on which Dave Grohl play drums), Dale Crover, and Joe Preston. In the CoS interview, both Buzz and Dale state that they were fans of the early KISS era, of which Buzz offers a very sound and compelling defense:

I liked KISS probably in the ‘70s, but by the time they put out Dynasty, I was done. Maybe before that. The Love Gun record, I was done. I can listen to, like, Hotter Than Hell, and think it’s good. And it is good. The thing about them is, as ridiculous and stupid as it is, they really had good songs. I mean, “Detroit Rock City” is as good a rock song as I’ve ever heard. There’s nothing wrong with that. If they were just image, no one would care. Same with Alice Cooper. If he didn’t have good songs, I would never listen. I’m not taken in by that crap. All show, no go, you know? It has to be good. That stuff has to be good. That’s what they have over image acts.

You can take KISS, and strip them down to nothing, and have them in a club with no makeup, little tiny amps, and if they played “Detroit Rock City”, they’d still be good. Same with Alice Cooper, if he played “Billion Dollar Babies” at the Troubadour with nothing, he’d fucking kill it, because it was good to begin with. That’s important. That’s the most important thing. In a world where we are surrounded by media on all sides, and at the click of the button you can see what Blue Cheer looked like in 1968, I think we have to make things more human, at least for us. I have to go out there and make this happen in people’s faces, and that can’t be done in a place that was designed for a sporting event. I would rather just go to the movies. I don’t enjoy those shows. I don’t like that. And that’s what drew me to punk rock to begin with, I liked the intimacy of it.

That is quite possibly one of the best things I’ve read all year. The fact is that just about every band I talk to, KISS comes up. It might be partially my doing since I almost always wear a KISS shirt when conducting interviews, but I have nothing to do with bands stating that KISS was an influence on them. So, I don’t get why there are so many metal and hard rock fans out there who consistently crap on KISS. If you don’t believe that KISS’ songs have legs, check out KISS Unplugged and you’ll see just how solid their songs are. I, as well as all other KISS fans, know that they’re not the greatest musicians in the world, but that’s hardly the point. The point is that the songs are fun and, you know, good.

Buzz and Dale talk about a lot in the CoS interview, including Tom Petty, the Smashing Pumpkins, and more. It’s a worthy read, who knows, you may learn a thing or two from a couple of guys who’ve been in the industry for over 30 years.