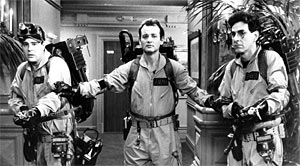 After years of talk of another Ghostbusters sequel, there’s still no official word on who will return from the original cast, if Ghostbusters 3 even happens. And that’s still a big “if” from what I’m hearing as of late. We already know for a fact that Dan Aykroyd is 100% on board because he is producing and writing along with Harold Ramis. Bill Murray’s commitment to reprising his role as Dr. Peter Venkman is still uncertain, but he is “welcome to come in” according to a recent update from Mr. Aykroyd.

Billy is welcome to come in. He hasn’t committed, of course we have a hole for him there and a portal for him to walk through if he wants to. We are very close now to getting it together to start casting and hiring people.

In addition, he also talked about moving forward without anyone from the original, which had me scratching my head:

You don’t need anyone from the first one. You don’t, it’s so strong without it. You get a new generation in there, new plot, use some of the particle physics, get a new Ecto, you don’t need to go back to the past.

If that’s the situation now, I see Ghostbusters 3 failing like the prequel to Dumb and Dumber. To me, it just doesn’t make sense for another sequel without Murray, Aykroyd, Ramis, and Ernie Hudson. Unless, they just want to use the franchise to cash in, which is my gut feeling.

Like I said, nothing is confirmed yet, but we’ll continue to keep our readers updated, so stay tuned to Yell! Magazine for more.