Damn! Roy Nelson Is Starting To Look Like A Light Heavyweight 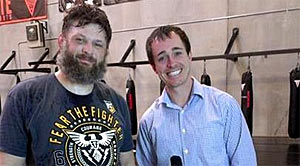 UFC President Dana White has slapped Roy Nelson (19–8) around because of his weight and appearance before, but I never thought in a million years Nelson listened and take to heart. Now, I have a feeling White won’t be able to slam him for that anymore.

Picture this! Nelson’s weight cut is naturally around 260 pounds. He’s called “Big Country” for a reason. To see him slim like this something has to be up. What’s up is that Nelson is on a mission to get down to 205 pounds faster than Daniel Cormier (12–0) for a shot at the light heavyweight title, possibly. Based on other reports, it actually might be easier for both to achieve that.

Nelson in his own words,

I figure that I’ll get down to 205 faster than Daniel. If I beat Daniel, wouldn’t I get a title shot? My goal is just to beat Daniel. My goal is to fight the champ. Right now, Daniel is in front of me, so I’m trying to beat him…in everything he does. I’m hearing that if he beats me, he’s supposed to get a title shot at 205; he gets to jump to the front of the line. I’m all about jumping to the front of the line. My mode of thinking is that he’s number 2, and if I beat him, my next step after that would be to fight for the belt, in either division.

Sorry White! It wasn’t your insults that changed Nelson after all. You know Nelson has a solid chin and you know he’s not the smartest person in the world of MMA. It’s going to require more to hurt this man’s feelings, White. Keep trying! For once, it actually sounds like Nelson has a great game plan.

Nelson is currently scheduled to face Cormier for UFC 166 on October 19, 2013 at the Toyota Center in Houston, Texas.