UFC 166: Daniel Cormier To File A Request To Have Roy Nelson Trim His Beard 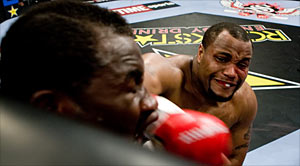 It sounds like UFC heavyweight Roy Nelson (19–8) is slowly creeping under Daniel Cormier‘s (12–0) skin with his recent weight cut and talking about going down to light heavyweight before the former Olympic wrestler. Nelson is aiming to have a shot at the strap of Jon “Bones” Jones, if he wins his bout against Cormier next weekend on the co-main event of UFC 166. Likewise for Cormier, who’s been lobbying to fight Jones for ages now.

But is Nelson playing a smart game with Cormier? I think not since Cormier just revealed new plans of his own to get “Big Country” out of his comfort zone. Cormier’s next move is to file a request to the Texas Department of Licensing and Regulation (TDLR) to have Nelson remove his scruffy beard before UFC 166.

Roy and I have been going back and forth. (He’s been) kinda messing with me up top and in my head and everything, so there’s something there with that beard. He only had it for a reason. He likes having it, so why not make him shave it, and take that comfort zone away from him?

It’s kind of tactical, and also I thought those guys (who were forced to shave at UFC 165) in Canada looked nice, man. Everybody is nice and clean, and like professional athletes.

If Cormier manages to convince the TDLR that Nelson has an advantage with his beard. Then Nelson will be forced to trim and kiss his beard goodbye for UFC 166, and he clearly isn’t happy about the idea of fighting without it.