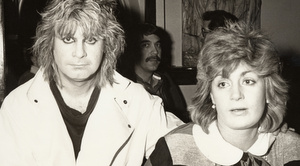 If Ozzy is the Prince of Darkness, does that make his wife Sharon the Princess of Darkness? Food for thought.

Nonetheless, Sharon is coming out with her memoir this month. It’s called Unbreakable, and in it she details the circumstances surround Ozzy’s relapse into drug and alcohol addiction and their split earlier this year. As with most cases of “getting caught” these days, Sharon found out about Ozzy’s relapse snooping through his cell phone. There, she found text messages in which Ozzy was asking to be supplied with drugs. So, what does a rich rockstars wife of 30 years do? She sells her husbands luxury cars, of course.

Not only that, but she eventually demanded a divorce with a monthly 100,000 British Pound price tag. According to an excerpt from the book, Ozzy said, “Over my dead body,” and Sharon threw a cup of coffee at him and “then I grabbed him and pulled at his precious hair with one hand, while trying to yank off his jewelry with the other. He went for me, trying to grab me in a headlock.” Something must have happened in Ozzy’s head, because he then went off to rehab.

After two months of sobriety, Sharon writes about their reunion: “It seemed like forever since I’d looked into my husband’s eyes, but now I was looking into sober eyes. The man I loved was present. I could tell he was relieved to be sitting next to me. I put my hand on his, took him in my arms and we cried.” The royal couple of darkness have been back together since June.

Whatever else is in Sharon’s Unbreakable, there’s no doubt that there will be a unique perspective on the Prince of Darkness.

What do you think: Did Ozzy deserve a second chance with Sharon? Do you think Ozzy would have died a long time ago if it weren’t for Sharon?