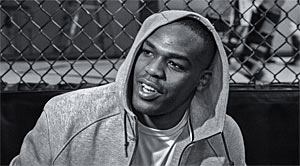 This month, if UFC Light Heavyweight Champion Jon “Bone” Jones (18-1) defends the strap for the sixth time, he will break Tito Ortiz’s long-standing record in the division. That also means Jones already defeated all of the best guys in light heavyweight such as Vitor Belfort, Rashad Evans, Lyoto Machida, Quinton Jackson, and Maurício Rua, respectively. He has nothing left to prove in the division other than breaking a record and to fight a guy who’s as big as he is.

Jones has been criticized in the past for his size in light heavyweight, and now he is sick of hearing about comparisons to Alexander Gustafsson (15-1). Jones and Gustafsson are slated to fight on September 21, 2013, at the Air Canada Centre in Toronto, Ontario, Canada. During the UFC 165 press conference on Tuesday, Jones fired back at the critics who compare him to his opponent:

I don’t really agree with any of the comparisons. I think the only thing me and Gustafsson have in common is that we’re both 26 years old and the fact that we’re both over 6-foot-4 tall. Outside of that, we are completely different fighters. I’ve been able to study him a lot over the last several months, and I realized there’s absolutely nothing he does that’s like me. We’re just completely different. We have the same height and age, and that’s absolutely it.

UFC President Dana White also commented on his size, saying if he wins on fight night, the argument won’t be valid anymore:

Everybody has been complaining about Jon Jones. That he’s too big for the weight division. He’s this, he’s that — which is total bullshit. I don’t care if he’s 10-feet tall. If he’s 205 pounds, then he’s right for the weight class. Finally he’s fighting a guy who’s his size, has almost the same reach, everything is almost the same, same age. So this is going to be a very interesting fight. If Jon Jones wins the fight, people can’t make the argument that he’s too big for the weight class anymore.

There’s still no official word yet from Jones on whether or not he will move up to heavyweight after UFC 165 since he has shown interest in rising light heavyweight contender Glover Teixeira.