What’s It Going To Take For Battlefield 4 To Run On The PC? 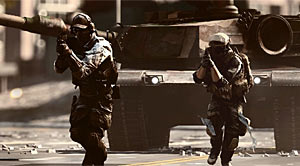 If you thought Battlefield 3 was visually stunning, then expect the sequel and thirteenth installment in the series, Battlefield 4, to elevate graphics to a whole new level next month. The screenshots alone for the upcoming shooter is enough to scare anyone with a PC that might be dated for this epic looking FPS. Good news is developer DICE just announced the minimum and recommended PC specifications for the game, so you can find out now if you need an upgrade or not.