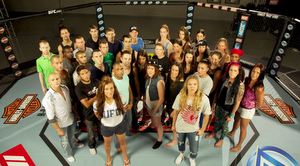 TUF 18 got underway last Wednesday, and it’s a landmark season for the show since it’s the first time women have competed on the show. And as entertaining as the episodes will prove to be, sometimes the best stuff is the behind the scenes stuff. In the TUF 18 casting tryouts video above you can see a whole lot of inspired fighters with big dreams, and by the end you can totally feel what it’s like to put it all on the line and fail. That poor, poor guy.

Another behind the scenes aspect that you might find interesting is the post-season TUF 18 Q&A session with Rousey and Tate. Even after a full season you can still see Rousey’s displeasure about the experience, especially when she fields questions about it specifically. I don’t blame her for having a foul taste in her mouth, she was totally blindsided for ratings — she knows it, TUF knows it, and you know it. If TUF had an ounce of respect for her, she would have been informed of the coaching switch. I’m also glad that Rousey has the balls to speak with a forked tongue about it; after all, she’s the champ, and she knows her career is nearing its end because of her age, so being honest really shouldn’t hurt her future.

Below I’ve included the teams Ronda Rousey and Miesha Tate selected after the first fight on the TUF 18 premiere. Enjoy the season!