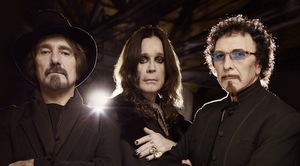 After 35 years, Black Sabbath finally put out an album with Ozzy Osbourne back on vocals. Sure, there were a few issues along the way, like cancer and drummer Bill Ward leaving the fold, but it was still Black Sabbath with Ozzy! So, with a new album (13), naturally a subsequent tour would take place. Earlier this week, the North American tour concluded, and the band had these parting words to say:

Whew! That went by fast. It seems like we just started the tour and now it’s over. Thank you to everyone who came out to see us on our North American tour. The audience response every night was unbelievable for which we thank you. We’ll be touring through South America all of October and then we’ll finish 2013 in Europe in November and December. We love you all and Keep Listening to Black Sabbath!

Our very own Hell’s Temple was among those responsive audiences and what follows is his concert review (it’s also his first piece with Yell! Magazine — be gentle).

Hello everyone! I’m here to bring you my first ever review for Yell! Magazine! I don’t know about you, but I had the pleasure of seeing Black Sabbath live a couple weeks ago…. epic! I don’t care what people say, Ozzy is a fucking legend! Pushing 65 years old, huge drug addict…. can barely walk/speak, but can still sing like there’s no tomorrow. Riddle me this, Batman. I went to see Black Sabbath live in Tinley Park, Illinois. It’s a well-known place for concerts and what not.

I had a birthday in July, and good ol’ mom asked me what I wanted for my birthday (even at my age, moms don’t stop being moms). So, I asked mom to buy me a ticket for the Black Sabbath concert, which was funny because she’s very big into church. Not judging, but I did laugh when I received the ticket in an email. “Church mom buys Black Sabbath ticket” is what went through my head for a while. Love my mom though, she made a Metal dream come true. I went to the show with a friend, who also had a birthday and I bought him his ticket as a gift. So, technically this was a birthday concert for the two of us. Stoked!

Alright, let’s get to this review. “Stop blabbing about the damn tickets and get on with the show.” What happens when two friends attend a concert… besides ungodly beer consumption? A lot of story telling about personal experiences with a band playing, some trivia, and speculation. I asked my friend which song he thought Sabbath would play to open the show. He said “Warpigs.” Well shit… that’s exactly what they opened with. Sirens going off, people cheering… this, my friends, was Heavy Metal at its finest. To be able to see Black Sabbath was a complete moment of awesome. Sabbath went through “Warpigs,” with the entire crowd singing along.

Sabbath went on to play some more of their classics such as, “Black Sabbath,” “Fairies Wear Boots,” “Dirty Women,” “Iron Man,” “Paranoid,” and “Children of the Grave,” just to name a few. One slight complaint (I don’t know why I would complain but it is what it is); Ozzy is old. He can’t hit the high notes like he used to. When he was singing “Dirty Women” he had trouble hitting the high end near the end and you could tell his voice was cracking. Oh well! You’re not young forever, right?

One of the cool parts of the show was Tommy Clufetos’ 15-minute drum solo. This guy can wail and looks like a damn viking beating the shit out of his kit. Here’s someone’s shitty cell phone video (complete with drunken guy screaming “yeeeeeaaaaah”) to give you an idea:

Well anyways, he played this wicked-awesome drum solo, then of course comes the slow-but-timely bass drum beat… Yeah, that’s right! I turned to my friend and said, “Iron Man!” You know you’re a true metalhead when you can name a song based of the first few seconds of a riff or drum line.

They played a few more songs, then, you know how shows go, the band says, “thank you, goodnight” and goes away for a few minutes to ultimately come back and play an encore. Well, big surprise, that’s what happened. When Black Sabbath came back onto the stage Tony Iommi started playing the main riff of “Sabbath Bloody Sabbath.” I was like, “damn I really wanted to see them play ‘Paranoid.'” Spoke too soon. About a minute into their “jam” session they started the intro of “Paranoid” and the crowd goes wild! What a way to end this iconic concert.

During the show, Ozzy mentioned that their most recent album, 13, was the first No.1 American hit in the 45 years that Black Sabbath has been around. How about that? Truly awesome show, and I’m glad i got to be a part of this moment. Heavy Metal runs through Ozzy’s blood and it’ll never die. \m/\m/