Preternatural: A Creature Feature To Nurture 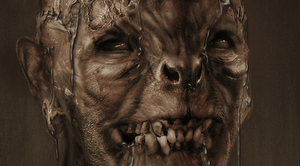 Earlier this year we brought you a review of Sick Boy (2012), which was a great zombie flick for genre fans. There were several things that made Sick Boy great, but the two things that stand out for us are the original zombie-genesis story and the top-notch FX the filmmakers pulled off with their limited budget.

The same team that brought us Sick Boy, including writer/director Tim T. Cunningham, are putting together a new film. Preternatural will be a creature feature, blending the styles of true crime documentaries, monster films, and “straight-up horror.” The film and filmmakers, however, need your help to get this project going — and considering what this very experienced team did on Sick Boy with such a limited budget, you can consider your contribution to Preternatural money well spent.

Check out the press release (below) for more details, but if you’d like to contribute, you have until September 24th to do so. Visit the following links and do your part:

Goat Man’s Hill just launched an IndieGoGo crowd funding campaign for an
ambitious horror feature entitled PRETERNATURAL. The team behind the 2012
indie thriller SICK BOY describes the new project as an unreliable
documentary about fairies. “It’s not a found footage film,” says writer /
director Tim T. Cunningham. “Nothing against them, but this will be
something more in the ballpark of TROLL HUNTER, but without any of the
comedic trappings. It’s going to be a straight up horror film.”

The film is designed to start like a true crime documentary investigating
the mysterious disappearance of an accused murderer, but quickly turns into
a tale of monsters when questions are raised as to whether the person the
accused allegedly murdered is actually dead. Promising to take full
advantage of their visual effects backgrounds and boasting the creature
design talents of Chris Grun whose credits include LAND OF THE LOST, CABIN
IN THE WOODS, and R.I.P.D., the Cunningham brothers aim to create an
experience that feels as real as possible. “It’s not like we’re going to
be marketing this as a true story or anything,” explains cinematographer /
visual effects supervisor Sean C. Cunningham. “But if we can make the
documentary sections feel absolutely authentic it should really add an
extra layer of threat to the horror elements.”

With several features in development, Goat Man’s Hill is turning to crowd
funding for this particular project because it is the most outside the
box. “We’re actively developing five features right now and of the five,
PRETERNATURAL is the most difficult to pitch to traditional financing
outlets,” says Tim. “It really needs to feel low budget to actually work.
Well done low-budget, but low-budget. Except for the VFX, but that’s where
our sweat equity comes into play.”

If the crowd funding campaign is successful in raising the tiny $35K
production budget, Goat Man’s Hill intends to roll cameras late 2013.
Based on the strength of their pre-production and production efforts, the
filmmakers will raise the larger post-production funds through more
traditional methods.