PayDay 2 Launching Next Week On Steam And Other Platforms 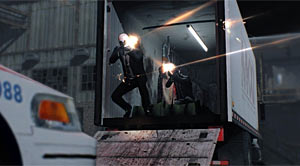 PayDay 2 was one of most appealing games that we saw during E3 this year, and this sequel, which hasn’t had a full release yet, already turned in a profit from pre-orders, according to co-developer Starbreeze Studios. That’s how much in demand PayDay 2 really is. Plus, it makes publisher 505 Games a happy camper since they have recouped all the money invested into the game, and profits from now on will be shared between both companies. That’s a pretty sweet deal in my opinion.

“Not only have we managed to deliver a desirable product in PayDay 2 but also executed a promotion that few companies of our size can. We now look forward to the royalty income that can secure the company’s development of its own IP in the future.”

“That PayDay 2 generates revenue for the company six days before the release is, of course, very unusual for games of this size and strengthens the long-term nature of our strategy.”

In addition to that announcement, developer Overkill Software also confirmed that PayDay 2 will be first available on Steam from August 13, 2013. No official date was mentioned for other platforms, however, PayDay 2 should be expected from August 13th and 16th.

In the meantime, make sure you check out and share the stellar screenshots above.