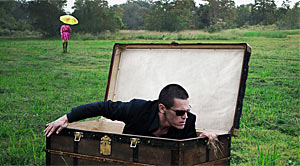 I’m not a fan of the Hollywood remake of Chan-wook Park’s Korean classic, Oldboy (2003). But it’s coming and I have no choice but to watch it and cast judgment. I am happy that the release date has been pushed back from October 25th to November 27th. The reason for the change hasn’t been announced, and I don’t imagine the new release date will do good things for its box office take: Instead of opening Halloween week, it’s opening the day before Thanksgiving against three pretty big films — Black Nativity, Frozen, and Homefront.

Click through to check out King Hazard’s take on the Oldboy remake.

An advertising executive is kidnapped and held hostage for 20 years in solitary confinement. When he is inexplicably released, he embarks on an obsessive mission to discover who orchestrated his punishment, only to find he is still trapped in a web of conspiracy and torment.