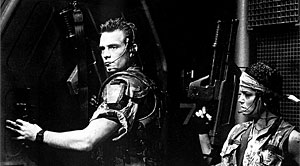 Do you remember that horrible FPS developed by Gearbox Software and published by Sega earlier this year? You know the one that didn’t really turn out to look and play as good as the one presented at conventions? Aliens: Colonial Marines ring a bell, anyone?

Well, I’m sure it does, and gamers won’t forget this disappointing title anytime soon. In fact, actor Michael Biehn (Aliens, Terminator, Navy Seals) just dropped his thoughts about it in an interview with Game Informer. Essentially, Biehn calls it a “passionless” effort by the developers.

“I think in movies, television, and the gaming world, you get some people that are really, really passionate, and some people that are just going through the paces. [Sega and Gearbox Software] think that because they have a brand name they’re going to get a hit game or hit movie out of it. That certainly was the situation on [Aliens: Colonial Marines].”

In addition, Biehn compares it to Far Cry 3: Blood Dragon, which he describes as a “great experience” with the games creative director Dean Evans, who by the sound of it was passionate about the project from the get-go.

“Dean is such an interesting and creative presence. He was talking to me about the game and the fact that it was an ‘80s throwback, and there would be a lot of lines that were Arnold Schwarzenegger-like, that were [Sylvester] Stallone-like, Bruce Willis, myself. Those kind of lines, that kind of vibe, and the fact that it was going to be a throwback to the ‘80s was something that I thought was interesting. But really it was his passion, man.”

Last week, the final DLC pack was released for Aliens: Colonial Marines, which features a new single-player campaign called “Stasis Interrupted,” it explores the tale of Corporal Hicks (Michael Biehn) between Aliens and Alien 3 and explains his survival after the events in those films.