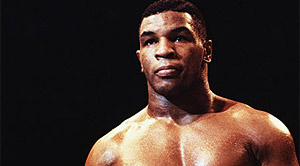 As much as we like former Heavyweight Champion Mike Tyson, I think we’re going to have to make fun of the once “Baddest Man on the Planet” a little this evening. Tyson just revealed to TMZ that he couldn’t beat the first character in the popular Nintendo game that had his name and face on the cover in the late ’80s.

Aside from Buster Douglas, Evander Holyfield, and Lennox Lewis (I won’t name the other dudes because they sucked), Glass Joe from Mike Tyson’s Punch-Out!! also gave the man a hard time in boxing. In fact, he never beat him.

If anyone was wondering all these year if Tyson could beat his own game, then I think this sums it up quite well. In addition, he also revealed the games he enjoys the most: Tyson said, “Tour of Duty” and titles with zombies.