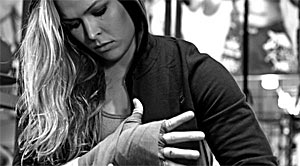 Like nobody saw this one coming? It appears that UFC Women’s Bantamweight Champion Ronda Rousey just signed her first acting role in The Expendables 3, starring Sylvester Stallone, Jason Statham, and Mickey Rourke.

Filming is expected to start next month in Los Angeles and Sly went to Twitter to announce the big news yesterday, which is already making noise in the world of MMA.

Rousey is the second female MMA fighter to star in a major Hollywood movie after Gina Carano, who shined in the 2011 film Haywire and in the 2013 film Fast & Furious 6. If Rousey follows Carano’s success in EX3, then we can definitely expect to see Rousey in more high-profile films, possibly even in the next installment of the Fast & Furious series directed the James Wan. However, that’s still in negotiation phase. Maybe she already turned it down for EX3.