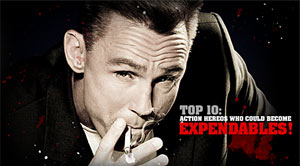 The Expendables 2, Sylvester Stallone’s latest ode to the glory days of the action genre, is fast approaching. Whether or not the movie ends up as nothing more than a wistful look back at the action heroes’ ’80s/’90s heyday or as a modern classic of the guys-and-guns genre will be decided on August 17th. Meanwhile, your faithful reviewer thought it might be a good time to dust off some of the lesser-known icons of action movies. I’m talking about the also-rans, the bench warmers, the not ready for prime time players relegated to eternal B-movie stardom.

Some of the men (and one woman) on this list could have been contenders. Nowadays, most of their movies are decorating the bottom of the bargain bin at your local video store. Still, a few of these action heroes may yet surprise us with an appearance in a future Expendables franchise entries. After all, Stallone plucked Fist Of The North Star actor Gary Daniels from relative obscurity for a small role in the first Expendables. And with the Italian Stallion quickly running out of big screen action movie veterans to throw at audiences, it might be time for him to scrape the bottom of the barrel. (Let’s face it, the only big name he’s yet to enlist is Steven Seagal and I’d bet my two front teeth he’s bound to show up in the next installment as an overweight, country singing Buddhist dictator who dispatches his foes with illegal chiropractor moves.)

“This may sting a little…”

Gird your loins, my faithful Yellers, TheMatt is back after a long absence to titillate your senses with another one of his famous top 10 lists! [Editor’s Note: Under no circumstances should you allow TheMatt to titillate you. We tried it once. Our nipples are still sore.]

Starting with the highest profile member of our club, Dacascos has the distinction of being one of the few entries on this list with movies that had wide theatrical releases, as opposed to wide sections of video store shelves to call home. His filmography runs the gamut from video games (Wing Commander IV) to his long-running stint as host of Iron Chef to his part in the acclaimed French movie Brotherhood Of The Wolves, in which he dressed like Jack Sparrow for some reason.

He also showed up in a role on Doogie Howser, MD of all things. In which he no doubt coached Neal Patrick Harris on the finer points of Capoiera on the way to defeating the Cobra Kai dojo at the All Valley Karate Tournament. Or am I getting my martial arts movies mixed up? Anyway! Dacascos’ recent direct-to-video output has been slowed by his Iron Chef gig (not to mention a stint on Dancing With The Stars) but it looks like he’s started up again with upcoming flicks like Trial Of Arms and To Have And To Hold. (Which sounds really wimpy. It should be renamed “To Have And To Choke Hold”).

Potential Expendables 3 Role: Pair him with Jet Li for an awesome fight scene! The duo already sparred in the awful Craddle 2 The Grave, the second inexplicable attempt at pairing Li with an American rapper. Let’s give audiences a more memorable clash this time.

Claim To Fame: Beating the snot out of Billy Blanks for all those damn Tae-Bo tapes!

Let’s get this out of the way: Avedon is a terrible thespian. Between bouts of constant smirking at the camera he likes to overact with the ferocity of 10 William Shatner’s devouring the scenery after a long hunger strike. I dare you to watch the following clip and not have your faith in humanity struck down instantly by the laughable attempt at emoting around the 5:30 mark.

Immortalized in our Top 10 B-Movies list, King of The Kickboxers, might not be in the same category as “things you can point to on your resume with pride,” but few can argue against its standing out as one of the greatest direct-to-video martial arts movies ever made. The Thunderdome-style match at the conclusion of King Of The Kickboxers is legendary and Avedon would often train for six months in preparation for a role, as he did for No Retreat, No Surrender 3. Granted, he could have sneaked in some acting classes in between sparring sessions, but at least he’s left behind a filmography filled with exciting fight sequences.

Potential Expendables 3 Role: The Expendables are hired to take out a renegade group of Tae Bo instructors. They’ll need an expert…