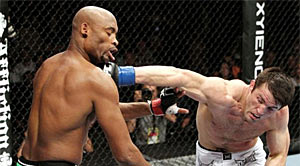 I don’t think will see a day in MMA Chael Sonnen will have something nice to say about former UFC Middleweight Champion Anderson Silva. It sounds like “The American Gangster” continues to dislike the man who surprisingly got knocked out cold by a determined Chris Weidman at UFC 162. Since the loss, Sonnen still isn’t getting off Silva’s case anytime soon. However, he did clear up the fact that those stupid conspiracy theorist’s are retarded.

In a recent interview with a radio show, Sonnen touched on Mike Tyson’s career and said Tyson’s opponents threw their fights, not Silva.

“Here’s what you gotta understand, he got knocked out cold. You don’t throw a fight by getting knocked out cold. You do what the guys did against Mike Tyson, you just pretend you’re knocked out cold. You stay down until the ref says 10 and then you pop back up to your feet and act like, ‘Where am I?’ Here’s the deal, he could of either fought serious and got beat up or clowned around and got beat up. But if he clowns around, he could also go, ‘Oh, I was just clowning around.’ So, they’re going to rematch and he’s going to get beat up again. This is not me speaking out against Anderson Silva, he’s excellent and he’s had an amazing career, but he’s no Chris Weidman and he’s never going to be.”

Silva vs. Weidman II is currently slated for Saturday, December 28, 2013 as the main event for UFC 168. The co-main event will feature another highly anticipated rematch between the UFC Women’s Bantamweight Champion Ronda Rousey and Miesha Tate.