I Spit On Your Grave 2 – First Trailer 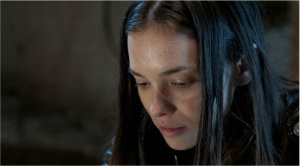 I Spit on Your Grave 2 is coming in September. And while the 2010 remake of the original 1978 Meir Zarchi film left fans relatively split, we should ask ourselves if a sequel is really needed.

I honestly enjoyed the Steven R. Monroe remake of I Spit on Your Grave, but I don’t want a sequel. I don’t see the point, other than it being an opportunity to cash in on the name. And, aren’t sequels supposed to have something carried over in terms of character or something? Certainly the theme of revenge is a carried over, which might have worked for Hostel, but I don’t think the effect will work as well here. I suppose our heroine could be a relative to the family in the first installment, but the odds of such terrors happening to one family are slim, and for it to happen twice to the same family! Fugget about it.

At any rate, I’m sure what director Steven R. Monroe and script writers Thomas Fenton and Neil Elman have planned for us will be terrifying and visceral. Seeing is believing, and we can all see it exclusively on September 20, 2013, at an L.A. theatrical engagement or on Blu-Ray Combo Pack, DVD, and On Demand on September 24, 2013.

I Spit on Your Grave 2 – synopsis:

“Naturally beautiful, Jessica (Dallender) has just settled into New York where she, like many other young women, is trying to make it as a model. But what starts out as an innocent and simple photo shoot soon turns into something disturbingly unthinkable! Raped, tortured and kidnapped to a foreign country, Jessica is buried alive and left to die. Against all odds, she manages to escape. Severely injured, she will have to tap into the darkest places of the human psyche to not only survive, but to exact her revenge…”
Rock Hard \m/
httpvh://youtu.be/vzw_EnOPSFY