Eli Roth’s Goretorium Is Getting Slaughtered 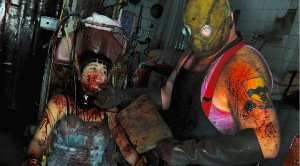 Just about a year ago we were telling you of Eli Roth‘s wickedly awesome Goretorium, a year-round haunted house on the Vegas Strip. Among its horror-themed attractions are a Year-Round Maze, Bloody Mary’s Bar, Baby Dolls Lounge, Wedding Chap-Hell, and Zombie Feedings. Sick, right? Who wouldn’t want to pay a visit to lose their head instead of their bankroll for a change? Not enough people apparently.

The Las Vegas Sun is reporting that the Goretorium’s parent company, Haunted Desert LLC, is filing for Chapter 11 bankruptcy. The company has listed its assets between $1 million to $10 million against liabilities. The company, including the Goretorium, will continue to operate until creditors approve or deny a reorganization plan.

A year-round horror attraction might not be the right thing, which leads me to believe that Rob Zombie might have the answer with his Great American Nightmare.

Sad day for horror fans, but we’ll keep you posted on Yell! Magazine. Let’s hold a seance to help out the Goretorium.