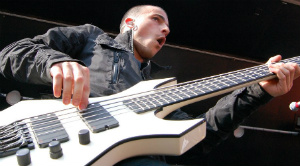 Trivium‘s new album is expected to drop later this year. And as I reported a while back, it’s being produced by David Draiman of Distrubed. I have no qualms in hiding the fact that I dislike Draiman to my core and think it’s a horrible mistake for Trivium to have him on board as producer. It’s not even the fact that I’m sure Draiman will make a more commercially ready product out of Trivium, it’s just that Draiman’s product sucks.

I wonder if this will be Trivium’s turning point, similar to Metallica‘s when they had Bob Rock produce their self-titled black album.

“It never has any filler or dead spots, and I think David really being a fan of Trivium, and really seeing our growth as a band along the way, helped out, because it wasn’t like he was coming in and not really knowing what our band was about. He really understood what we’ve built as a band over the last seven, eight years, and how important it is to really respect all of that and to keep that stuff that’s made us Trivium, and just better it — bigger melodies, bigger hooks, bigger riffs, everything.”

“Sonically, he wanted us to make a thicker-sounding album, and he definitely really pushed [mixer] Colin [Richardson] and [engineer] Carl [Bown] to make this our biggest-sounding record. And I think they did an amazing job, to be honest. We’ve worked with Colin for so many records now, and he’s totally outdone himself.”

Yes, Trivium has always had big melodies, hooks, and riffs, but to make them bigger and then thicken them up will make them sound a lot more like Disturbed, which is a brand of metal that’s as thick and as common as the pancake batter at Denny’s.

If you care to read the rest of the interview, go to www.roadrunnerrecords.com.

What do you think of Draiman producing Trivium? Post your thoughts in the comments section below.