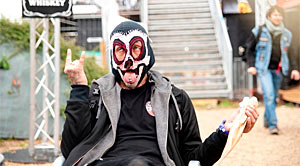 Evil Argento here. Clearly our correspondents in France attended the larger event than King Hazard and myself did. Size doesn’t matter (at least that’s what she keeps telling me), but facts are facts. Hellfest draws a plethora of much bigger bands, has more stages, and even more fans – it’s bigger. I’m sure they didn’t have oceans of piss at Hellfest, though… so who’s missing out now?

Every stage on Day 2 of Hellfest had awesome lineups (check out our previous report to see the lineup), and the fans that showed up are testament to quality of the performers. Reports indicate that there were more than 110,000 in attendance. But the fans, which our correspondents focused on, were sometimes just as much of a highlight as the acts on stage. Our gallery, The Faces of Hellfest, proves it and we have to give props to the Slayer zombie – he’s just fracking unbelievable.

Take a gander at our Hellfest 2013, Day 2 gallery and let us know what you think. Then check out our Day One gallery, if you haven’t all ready.