The Last Will And Testament Of Rosalind Leigh 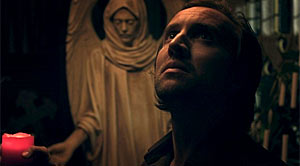 The Last Will And Testament Of Rosalind Leigh synopsis:

The film tells the story of Leon (Aaron Poole of Small Town Murder Songs, The Samaritan), an antiques collector who inherits a house from his estranged mother Rosalind (Academy Award-winner Vanessa Redgrave, Mission: Impossible, Corialanus, The Devils) only to discover that she had been living in a shrine devoted to a mysterious cult of angels. As night falls, Leon comes to suspect that his mother’s oppressive spirit still lingers within her home and is using items in the house to contact him with an urgent message.

The Last Will and Testament of Rosalind Leigh also features character actor Julian Richings (X-Men: The Last Stand, Wrong Turn, Supernatural), Stephen Eric McIntyre (High Life, Fear X), Genie Award-winning star Charlotte Sullivan (Population 436, Defendor), and cult television icon Mitch Markowitz (The Hilarious House of Frightenstein), and features an original score by world beat superstar Mercan Dede (Kingdom of Heaven, The Passion of the Christ), and effects work by Anthony Scott Burns (MTV Canada, Paul Van Dyk’s Evolution) and Marcus Alqueres (The Adventures of Tintin, Rise of the Planet of the Apes). The film is produced by Marco Pecota (The Facts in the Case of Mister Hollow) for Rue Morgue Cinema, made possible with the participation of Telefilm Canada.

The DVD will also feature audio commentary with Director Rodrigo Gudiño, a Making of Featurette, Mercan Dede featurette, poster and photo gallery, and The Facts in the Case of Mister Hollow short film.