Still Hope For Bungie To Develop Destiny For The PC 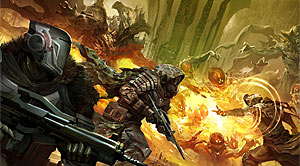 Halo fans should be well aware of Bungie’s upcoming video game Destiny, which the developer is describing as the world’s first “shared-world shooter” set in a universe that will be “alive.” This means the events that will take place in Destiny won’t necessarily be planned by Bungie, which will ultimately create a new dynamic gameplay experience for gamers. The game’s style is also described as an “always-online FPS” that will incorporate massively multiplayer online game (MMO) elements. Those are the biggest selling points for the Activision game that will be available on the PS3 and Xbox 360, including next-gen consoles such as Xbox One and PlayStation 4.

For those of you who run a PC and are anxious to know if Destiny will be developed for you, be consoled that Bungie is still considering a PC version. Community Manager Eric Osborne at Bungie broke the news with IGN earlier this week, but couldn’t confirm anything just yet.

“We haven’t said yes, and we haven’t said no,” Osborne said. “The more platforms we take on, the more work it ultimately becomes, and what we don’t want is to compromise the core experience on any platforms. We have a lot of people who play on PCs. We have a lot of appetite to build that experience. We haven’t announced it yet, but we’re looking forward to talking more about that kind of stuff in the future.”