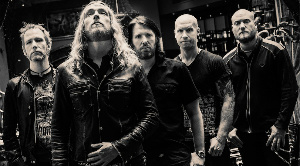 Sweden’s melodic death metal pioneers, Dark Tranquillity, are champing at the bit to release their highly anticipated 10th studio album, Construct, on May 27th in Europe and May 28th in North America via Century Media Records. However, since we’re about two weeks away, the band has launched the video for their new single, “Uniformity.” This video was produced and directed by Revolver Film Company and Patric Ullaeus, who previously worked with In Flames, Hammerfall, and Lacuna Coil.

While I find the video for this exceptional song incredibly boring, the band seems to be pretty happy about it:

“After the introspective ‘For Broken Words’ and the uptempo riffing of ‘The Science of Noise,’ it’s time to showcase the more anthemic aspects of the new album with the song ‘Uniformity.’ In contrast to the more experimental promo videos we made last year, we wanted the ‘Uniformity’ clip to be an intimate and genuine performance video. Nothing but the music itself and the band members playing in the rehearsal room. For this, we hired renowned director Patric Ullaeus, and we’re very happy to share the result with you. Stand up and be counted!”

If you’d like to check out more from Dark Tranquillity’s Construct, check out the following:

“The Science Of Noise”