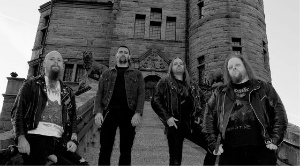 Sweden’s Entrails has launched the third single, “Defleshed,” from their upcoming new album, Raging Death. This is brutally honest death metal and well worth a listen.

Raging Death has been released (May 10th/13th) via Metal Blade Records in Europe on vinyl, as a limited Digi-CD with bonus-CD, and as a jewel-case CD. It will be released on May 14th in North America on CD and through your favorite digital music outlet. Only the vinyl version and the limited Digi-CD will include the Marduk cover, “Dark Endless,” as a bonus track.

Entrails previously made Raging Death‘s “Bloodhammer” and “In Pieces” available for your bleeding eardrums:

Comments the band: “This is the perfect next step for Entrails. A massive stench of death, right in your face! Raging Death as a title suited the album as a whole, since it’s pure death metal without mercy.”

Raging Death was recorded in different studios: the drum recordings took place at the Racetrack studios while the basis recordings were done at Jimmy’s own The Crypt recording studios. The album was mixed and mastered by Dan Swanö at Unisound.