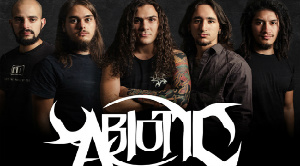 Last time we talked about Abiotic we were giving you a making of clip for the “Facades” video and stating that they were in the running to open this year’s Summer Slaughter tour. Since then, they’ve released their video and ripped through their tour with Dark Sermon, which included a stop at the New England Metal & Hardcore Fest. But that doesn’t mean they get a break – there’s no rest for the demonically possessed.

Abiotic is set to play select dates throughout the rest of May and June, so if you missed them earlier, you shouldn’t miss them again. In May, fans in the southeast can catch Abiotic with label mates, Goatwhore, along with 3 Inches of Blood and Withered. In June, headlining shows beginning June 8th will lead the band up to four shows with The Faceless. These dates will run June 12th-19th. Many more tour dates for 2013 are currently being compiled and will be announced as they are confirmed.

w/ The Faceless, Within the Ruins, Rings of Saturn