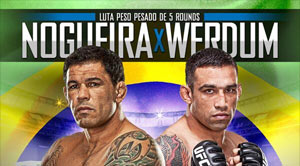 Additionally, a light heavyweigth bout between Thiago Silva and Rafael Cavalcante has been recently added to the main fight card, including the welterweight finals of TUF Brazil 2.

UFC on Fuel TV 10 will be held on June 8, 2013 at Ginasio Paulo Sarasate in Fortaleza, Brazil.