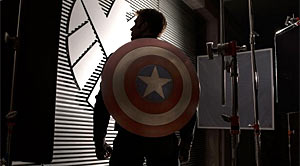 Here’s the first official image for the upcoming Captain America: The Winter Soldier, sequel to The First Avenger, which was, in my opinion, the weakest film leading up to The Avengers. Actually, the second half of the film was weak. The first half was brilliant and amazing, but I guess everyone likes an underdog story.

Captain America: The Winter Soldier, written by Christopher Markus & Stephen McFeely and directed by Anthony and Joe Russo, will pick up where The Avengers left off. If it’s as bad as the second half of the first film, the only good reason to see this sequel might be Scarlett Johansson as Black Widow. Samuel L. Jackson and Robert Redford will also appear in The Winter Soldier.