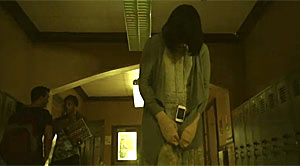 Shelley’s appearance is short lived in this clip, and it doesn’t reveal much on who she really is. However, one thing is for sure, she looks weird, has something wrong with her hands, and breaths like a freaging monster. That’s about as much as I could say. I guess Netflix wants to keep her story mysterious until the show kickstarts in the summer. I can confirm that Shelley could be an important character in Hemlock Grove, as she appears throughout a few episodes in Season 1.

This slick looking new horror series that features a werewolf is based on the debut novel of the same name by Brian McGreevy, and will be part of a growing experience on Netflix, which focuses on original entertainment just like Amazon Instant with Zombieland.

A young girl is brutally murdered and found near the former Godfrey steel mill. As rumors mount, two of the suspects in her killing, Peter Rumancek, a 17-year-old Gypsy trailer trash kid rumored to be a werewolf, and Roman, the heir to the Godfrey estate, decide to find the killer themselves.