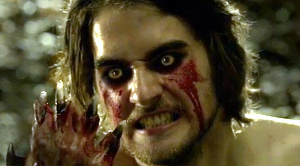 Netflix will be premiering its new series, Hemlock Grove, on April 19th, but they did show off some kick-ass footage recently at WonderCon 2013. The clip is titled “The Monster Within” and it features an incredible werewolf transformation. We’re not sure if it’s the best ever transformation, but it’s pretty damn awesome – and graphic.

A teenage girl is brutally murdered, sparking a hunt for her killer. But in a town where everyone hides a secret, will they find the monster among them?