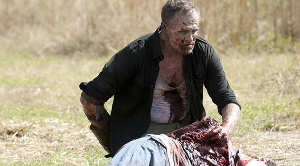 As the penultimate Season 3 episode to The Walking Dead, it was a mixed bag. It was good and it was bad; it felt hurried and it felt slow; it tied up loose ends and it burned the rope entirely; it led to the finale nicely and it forced its setup.

Let’s start with Merle. In “This Sorrowful Life” he actually flips sides, kind of becoming the necessary evil. He’s straight with Rick about what the Governor will do to Michonne. He doesn’t punch back when Carol questions his allegiance (actually, he gives her a compliment about how tough she’s become). He gets the job done in terms of Michonne, as per Rick’s request.

The only real hint of his former self is when Daryl nearly catches him red handed. And who knows what Merle was doing? Why did he take the phone?

Then, as Merle is escorting Michonne to her fate with the Governor, he surprises us all by setting Michonne free – and I don’t think it has anything to do with her calm arguments for why he shouldn’t turn her over. I think his true intention was to turn the tide in the tribe’s favor to give his little brother a chance to live and be happy. I think he recognized how Daryl had changed and found his place in the new world. And so, Merle has his swan song. Appropriately, he drinks to prep himself, and totally awesomely he listens to Motorhead’s “Stay Clean” for inspiration. Actually, he’s blasting the music to attract a mass of walkers to lead them Pied Piper style to where Michonne was to be turned over to the Governor. He succeeds and takes a sniper position to blast the Woodbury henchmen as they open fire on the mini-hoard.

While there are a few things I’m not sure about, like how a high-caliber round wouldn’t have passed through the first guy and into the Governor or why we’ve been forced to sympathize for Merle, I am sure that the writers didn’t know what to do with the character. Yes, Merle was sitting between a rock and a hard place with the tribe, but his entry into the “inner circle” could have spanned Season 4. Lazy. And that’s bad.

I do like how Merle was the only member of the tribe to go on the surprise offensive. Imagine the Woodbury body count with a few strategically placed snipers to take them out. Glenn is a dumbass. I get it. I really do. How many World War II films have we seen in which a soldier proposes, a soldier gets married, a soldier impregnates his new bride, a soldier goes to war – and dies. I get how he wants to be noble and, as he said, he “wants her to know” how much he loves her. But she already knows. And in this case, she’s a soldier too, so double the odds of one of them dying before Season 3 is finished. I’m guessing Glenn, so that we can have another baby on the way. Given the laziness of the writers with Merle, I bet they overlooked the fact that there’s already a baby in the series. Rick’s faults sure got summarily resolved. And of course his late wife, Lori, is the catalyst. As a result, his madness brought him back to sanity, saving Michonne in the process, or at least if it hadn’t been too late. He also realized that his dictatorship was too much for him to bear, as revealed in his confessional speech to the tribe. In his speech he gives the choice to flee or fight to the tribe, which is totally pointless writing; obviously the tribe will make a stand – it’s only what the entire season has been building toward.

Oddly, if this speech was delivered by the Governor to his people, we’d view it as manipulative, but coming from Rick it seems sincere.

Near the end of “This Sorrowful Life” Rick sees Michonne making her way back to the prison. So, either she doubts what Merle told her or she’s totally stupid. Then again, maybe she wants to confront the man who was willing to feed her to the wolves. No doubt there’s going to be a Michonne/Rick talk in the finale, as well as tribesmen testifying to Michonne Rick’s epiphany, and finally taking Daryl’s words, “It ain’t us,” to heart.

Hershel reads from the Good Book in prayer with his daughters, which seems a bit like someone’s last rites. For obvious reasons, the writers made an excellent choice in using Psalm 91:

You will not fear the terror of night,
nor the arrow that flies by day,
nor the pestilence that stalks in the darkness,
nor the plague that destroys at midday.
A thousand may fall at your side,
ten thousand at your right hand,
but it will not come near you.
You will only observe with your eyes
and see the punishment of the wicked.

Hershel went on to say something like, “what I wouldn’t do to protect you girls” to Maggie and Beth. At first, it has the literal sense of sacrificing Michonne, especially when Rick walks and gives the sentiment context. However, this is foreshadowing if I ever saw it. Now that he knows that at least Maggie will be taken care of by her future husband, Hershel will be free to sacrifice himself for Maggie’s life. Yes, I’m predicting the old man will be offed in the season finale. Besides, what good is a one-legged man for a tribe on the move? Beth might actually get killed too, since any drone could replace her (kind of like how blacks are interchangeable on the show). Then again, she’s the babysitter. Daryl, our lovable badass, has all but completed his transformation. He thinks of the tribe’s morality and he understands that you “can’t do things without people anymore,” as he informed Merle. He also attempts to intercept Merle before Michonne was turned over. He’s too late in catching up, however, and comes face to face with his freshly zombified brother. An epic scene, and Norman Reedus played it perfectly; first grief, then rage. As Daryl proceeded to make pulp of Merle’s face, I’m not sure if it was for Merle being such an asshole or for Merle being such a royal asshole. In either case, that’s not the type of rage that comes from a year of bad behavior, but rather a lifetime of selfish thought, such as when Merle abandoned Daryle to their father’s hands.

If the season finale is about the war, which we’re all hoping it is, Daryl is going to get your testosterone flowing and your ass on the edge of your seat.

There are always casualties on both sides in a war. And the tribe, with its dwindling numbers, can’t really afford to lose anyone else. To compensate, and make the show somewhat believable, odds are that Tyreese and most of his crew will do their righteous thing and rejoin the tribe. Some of Woodbury’s good citizens will probably become mutinous to the evils of the Governor.

How the war will begin will be interesting to see. After the tribe votes, how will they proceed: with caution or on the offensive. Merle certainly stirred up the beehive, so it’ll be interesting to see how the Governor reacts: recklessly or as planned. And Andrea, what will become of her? Who will find her, if she survives? How badly will she have been tortured?

As you can see, “This Sorrowful Life” was a bit scattered, but it served its purpose and was at least interesting – thank you, Merle.