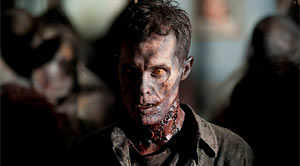 In many respects, this episode of The Walking Dead played out like a cutscene in a video game. What with the Governor hunting down Andrea in a truck and then the two of them playing a game of cat and mouse in an old warehouse of some sort. And who didn’t stand up and shout a righteous “hell yeah” when Andrea made her exit?

It’s amazing how much character development the writers managed to cram into an episode that primarily focused on the Governor acting like an abusive husband. Christ, would someone kill that bastard already? And poor Andrea really should have done the deed after she did the deed Carol suggested she do. Now she’s in for a world of hurt.

Faithfully, we’re seeing Michonne’s character advance with nearly every episode. In “Prey” we were treated to a flashback scene, in which she and Andrea were settling in for the night on a cold forest floor, with the two jawless slave walkers in tow. We learn that Michonne did, in fact, know these walkers when they were breathers and she so warmly states that “they deserve what they got; they weren’t human to begin with.” That doesn’t fully answer the question, since her exact relationship to them is still unknown. However, the katana-wielding slayer has become even more intriguing, as we’re left wondering just where she comes from. The quiet warrior has also garnered even more sympathy.

Andrea has chosen to return to the tribe, obviously, in this near Civil War reenactment of side swapping, betrayal, deception, sabotage, and revenge. I personally like the idea of The Walking Dead conjuring Civil War imagery, brother against brother, in a simpler, minimalist time. Now we just need a zombified Patrick Swayze with a musket.

It’s not exactly clear why Milton is aiding Andrea, unless it’s morals or ethics kicking in – or a realization that the Governor is a madman. However, just like we don’t want in-cold-blood tainting our heroes, neither does Milton, who stopped Andrea’s sniper attempt. Another angle thrown in here is the fact that Milton knew the Governor when he was Philip, before the zombie outbreak. It will be interesting to learn if this fact will be enough to keep the Governor from killing him, execution style.

Andrea must have a huge maternal instinct, the kind that wants to take in stray dogs. It’s impossible to believe that she would think that “Merle fits in” when she invited Milton to come with her to regroup with the tribe. I get why she would want to bring Milton along, but from our vantage point we know that the tribe is on edge and would immediately quarantine Milton for questioning/interrogation. Not exactly fitting in, is it?

Our two leaders are clearly affected by their madness. However, Rick seems to be on his way out, disbelieving what he thinks he sees – even if he really sees it. Damn you, Rick.

The Governor, on the other hand, displays a disturbing downward spiral as he whistles “Bye Baby Bunting,” the song he was humming while brushing Penny’s hair earlier this season, while setting up his torture room and pursuing Andrea in the warehouse. What kind of man distorts and confuses a cherished father-daughter lullaby with torture and murder? A madman, that’s who. Revenge against Michonne for executing his daughter is clearly at the top of the Governor’s agenda, and at this point we can see he’s getting reckless and that should be his downfall.

The writers are having a bit of fun with us regarding Tyreese, making him out to be a bit of a righteous Lennie Small. On the one hand he’s indignant and ready to fend for himself when confronted with the horrors Woodbury is capable of. On the other hand, he’s susceptible to deceit, and quickly changes his mind to stay. However, I believe he’s just buying some time to think things through and the big man will come through for us and the tribe in the clinch.

In the end, tension is mounting, sides are confused, war plans are being made, and we’re heading into the season finale. It should be a good one.

However, again with the musical score at the end. Christ, that’s more True Blood than The Walking Dead. If you were gonna do it in this episode, the least you could have done was play some 2 Live Crew: