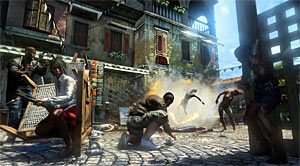 Deep Silver has an exciting line-up of video game releases this year, which includes Saints Row IV, Dead Island Riptide, Metro: Last Light, and Sacred Citadel. According to a press release yesterday, each title will be showcased at PAX East 2013 in some capacity. However, out of the list of upcoming games, we can confirm that Dead Island Riptide will be playable at the Deep Silver booth later this month during the event.

In addition, one of the producers of this undead franchise will be on location to assist you throughout your gameplay experience and answer any question you may have about the sequel.

And why not follow the Saints Row presentation with a little undead massacre? Deep Silver will also showcase the hotly anticipated Dead Island Riptide — the successor to the massive zombie-killing hit of 2011. Every attendee that plays Dead Island Riptide at the Deep Silver booth can enjoy a multiplayer session with one of Dead Island Riptide’s producers. This will not guarantee player survival, but it will enhance attendees’ bragging rights by 4.23%, according to early calculations.