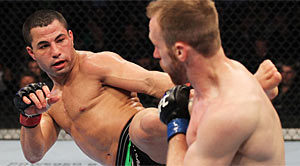 The UFC’s lightweight division is becoming more fruitful each year, and by no means are the fights getting easier. A handful of title contenders emerge after every card the promotion puts on and it is home to the most promising prospects in the sport.

Rising Canadian prospect John “The Bull” Makdessi (10-2 MMA) has already had his fair share of bright moments. The 27-year-old Tristar Gym product scored one of the most spectacular knockouts in UFC history back in April of 2011, at UFC 129 in Toronto; he finished Kyle Watson in the third round by a spinning back-fist.

For Makdessi, it’s about living for the moment in the present day of his fighting career, which is constantly getting better and enjoying the ride.

At UFC 158, John Makdessi will showcase his skills on the preliminary card against Daron Cruickshank (12-2 MMA), who is currently riding a six-fight win streak. His most recent performance in the Octagon was at UFC on Fox 5 back in December, where he scored a headkick knockout over Henry Martinez. Confident of his abilities, but wary of the threat his opponent poses, Makdessi focuses on using a strategy that betters himself as a fighter – and worries him less about his opponent’s plans.

“He’s a dynamic striker, background wrestler; every fight is a tough fight for me. We’re all tough fighters; at the end of the day, in my eyes, I can’t underestimate him. I’ve never underestimated my opponent, but at the same time I’m confident in my skills, confident in my training and I believe in myself. I can’t really focus on what he’s going to bring to the table; I can only focus on fighting my fight.”

Perhaps the most bittersweet moment of Makdessi’s career was recently at UFC 154 in Montreal. He defeated Sam Stout in a fight that showcased Makdessi’s skills as well as his overall improvement as a young, hungry fighter using his speed and effective counter-striking. He had lost two fights in a row leading up to the bout and was very emotional in post-fight interviews. He was very humble leading up to the fight and when he won the unanimous decision in front of his home crowd, Makdessi regained the confidence he needed to be one of the world’s best.

“Sam Stout is a tough fighter… I feel like I’m always fighting guys that are more experience than me. Coming from losses, emotionally, I had a lot of stuff inside of me. It gave me back my confidence. I do deserve to be at the top of the lightweight division. I do believe I’m one of the best fighter’s at 155.”

Makdessi will be fighting in Montreal for the third time under the UFC banner and connects with the atmosphere created in the Bell Centre by the city’s faithful, whom he believes deserve to get what they paid for: