UPDATED: Carrie Fisher Was “Joking” To Be In Star Wars Episode VII 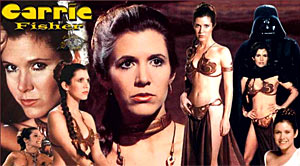 *UPDATE: According to a recent post on CNN, Carrie Fisher‘s publicist told the news outlet that “she was joking,” about playing Princess Leia with Palm Beach Illustrated and that “nothing has been announced.” Enough said, so lets bury this rumor for good now.

Though she probably won’t be appearing as the Slave Princess, but rather as an elderly person “in an intergalactic old folks’ home,” as Fisher said to Palm Beach Illustrated. She’s not the first from the original trilogy to express an interest in appearing in Episode VII. As we reported earlier, Harrison Ford is in and, in fact, it’s being reported that the future Star Wars will focus on Han Solo, as well as Boba Fett and Yoda.

It is speculative, however, the extent of which Fisher’s role will be, or even if her confirmation is valid. She does joke about it (which is probably due to her quirky sense of humor) and she’s confirmed her involvement in the past, which was retracted by her PR people.

There’s still a part of me that has a crush on Carrie Fisher, as I’m sure many of you still do. But what do you guys think; does Fisher have a place in the new saga? Post your comments below.