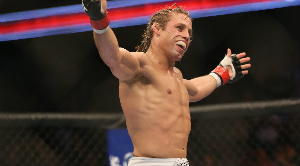 A flyweight title bout between Champion Demetrious Johnson and John Moraga has been scrapped due to an undisclosed injury Johnson is suffering from. The news broke last night and Dana White took to Twitter to confirm the new main event.

Urijah Faber, who beat Ivan Menjivar by submission last week at UFC 157, meets Scott Jorgensen in a bantamweight bout. The fight will serve as the main event for The Ultimate Fighter 17 finale, which features coaches Jon Jones and Chael Sonnen.

Also on the card is the second women’s fight in UFC history, featuring Miesha Tate and Cat Zingano. The official fight card follows: