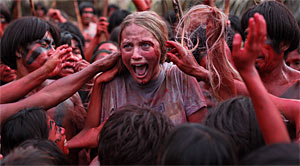 The still you’re taking a quick peek at may look like a horror scene directly from the film Cannibal Holocaust, but in fact is the first photo from Eli Roth’s The Green Inferno, which pretty much sounds like a prequel or sequel to Holocaust based on the all details released thus far, including this official synopsis.

A group of student activists from New York City travel to the Amazon to protect a dying tribe, but crash in the jungle and are taken hostage by the very natives they saved.

Kirby Bliss Blanton (Scar, Project X) is the young up-and-coming actress seen surrounded by the group of hungry cannibals in the still above, and if you let your imagination go a little further based on her facial expression alone, I’m 100% sure you probably know what happens next. Lets just say the cannibals aren’t taking any seizing notes for her prom dress anytime soon.

As we reported before, the filming for The Green Inferno was wrapped up late last year, and the film was shot in a remote village off of the Amazon river, which also stars Daryl Sabara, Lorenza Izzo (Aftershock), Ariel Levy (Aftershock), Aaron Burns, Magda Apanowicz (Caprica), and Sky Ferreira.

We still don’t have any details on when the film will premiere, or when it is expected to be released to the public, but once we hear of them we will be sure to keep you in the loop here on Yell! Magazine.