UFC 156 Aftermath: What’s Next For the Winners… 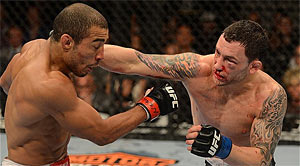 The first UFC pay-per-view of 2013 is in the books and to say it will be remembered, as one of the most surprising events in UFC history would be an accurate statement. José Aldo proved he is the featherweight kingpin of MMA, beating Frankie Edgar in a decision to retain his title. Edgar saw himself on the losing end of another decision that many thought could have gone his way but ultimately he did not do enough to capture the title away from Aldo.

Antonio Rogerio Nogueira had the most bittersweet victory of his career as he beat former UFC Light Heavyweight Champion Rashad Evans in a dull fight. After three rounds of jab-catching, this fight was not exactly decisive but Nogueira was correctly awarded the contest, even though he was not dominant.

After leaving his hands down with absolutely no respect for his opponent, former STRIKEFORCE, DREAM and K-1 champion Alistair Overeem was brutally knocked out by heavy underdog, Antonio “Bigfoot” Silva. The Brazilian caught Overeem with some powerful strikes in the third round and finished the man many believed would be Cain Velasquez’s next opponent.

In a new installment for Yell! Magazine, we look at what’s next for a few main card fighters we saw on Saturday night:

Aldo was brought into the deep waters by Edgar in the fourth and fifth round but never looked seriously damaged. He does have the possibility of tiring in the championship rounds as we saw against Edgar and in the past with Mark Hominick. It has been suggested by many observers that Aldo should move up to lightweight, since he has a difficult time adjusting to the weight cut.

However like his fellow Brazilian training partner, Anderson Silva, Aldo may want to cement his legacy in the division much like Silva has done at middleweight. Even though Aldo looks near impossible to solve, there are still challenges for him. Dana White stated at the post-fight press conference that Anthony Pettis contacted him and that the Roufusport lightweight was willing to drop down to fight Aldo. Although all signs point to Ricardo Lamas, who has been on a tear as of late, having won all four of his UFC fights including the destruction of Erik Koch last week.

Whatever the case may be Aldo still has plenty of work left in the featherweight division.

What’s next for Evans, Silva and Benavidez on the jump…