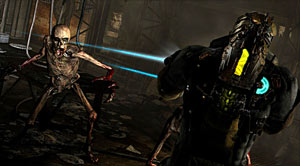 With a little over a week left to go before the official release of EA’s sci-fi horror schlock, we finally bring you the terrifying launch trailer for Dead Space 3, which will be available for the PlayStation 3, Xbox 360, and PC on February 5, in North America and February 8, in Europe.

As you will see in the trailer, Isaac’s character has changed into a lean, mean Necromorph hunter, unlike before, when he just wanted to save his girlfriend in the first installment and struggled with sanity after losing her in the sequel. From the look of the trailer, the direction of the game seems to have evolved from a survival-horror franchise to an action-packed thriller. Whether this is a good or a bad thing to do in a series that most gamers are already familiar with, I’m still anxiously waiting to get my hands on a copy since the announcement of Dead Space 3 back in May 2012.

The game looks bloody brutal in my opinion, and I’m curious to know if you think the same. So drop us a comment about it in the feedback section below.