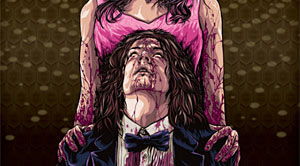 The fact is, 2012 was a pretty amazing year for film, and as entertainment junkies, we nearly overdosed. And with all this great cinema, we couldn’t contain ourselves; we had to share with you Yellers our list of movies with balls.

What do we mean when we say these are movies with balls? Well, the majority of the films presented here are mainstream enough to be accessible to just about anyone on the planet, however, they got the old adrenal glands working and they pushed the boundaries of conventional cinema in some way.

So, let’s get on with the damn thing.

No.10 The Man With the Iron Fists

Starting the list off, we have RZA’s martial arts throwback film, The Man with the Iron Fists. RZA, known primarily as a member of the hip-hop collective Wu-Tang, has been doing more and more work in the film industry, mostly composing scores. The plot of this film is a bit lackluster, especially the warring gangs and stealing gold, but the movie is still a very fun exercise in ’70s- and ’80s-style kung fu. If you like stuff that is a little cheesy but still a ton of fun, this is the movie for you!

No.9 The Dark Knight Rises

Finishing off a trilogy with as much critical and commercial success as Nolan’s Batman is never an easy task. There was probably no other movie released in 2012 with as much hype as The Dark Knight Rises. While some people were divided in their feelings towards TDKR, we maintain that it is a solid ending to one of the best trilogies in movie history. Most people have probably already seen this movie, but if you have not yet seen TDKR ,or any of Nolan’s trilogy, we advise you to seek it out as soon as possible.

We won’t get into personal feelings about James Bond at the moment. That could be an article by itself. What we will say is that Skyfall is one of the most interesting Bond films ever made. Though it starts off as any normal Bond flick would, it quickly becomes something more. Heavily focused on characters as opposed to the usual action, it was refreshing to see director Sam Mendes (Road to Perdition) portray a personal take on the character. The film is far from perfect, and often times falls into generic. What makes the movie special, however, is some mesmerizing performances from both Daniel Craig (Casino Royale) and Javier Bardem (No Country for Old Men). The fact that the film also decided to probe deeper into Bond’s history and childhood was an interesting choice. It may not always work, but it is never boring.

Matthew McConaughey has really been coming up as an actor over this past year and Killer Joe proves McConaughey is becoming a more serious actor. Even if you don’t like the story, McConaughey’s performance as the title character is nothing short of mesmerizing.

Who would have thought that a remake of Judge Dredd would end up being good? We were fairly skeptical upon our initial viewing of Dredd. The original isn’t really a movie we’re fond of. Really, we had no expectations at all for this film.

Dredd stars Karl Urban (Lord of the Rings, Star Trek) as the titular character. For those unfamiliar with the comics, the story takes place in Mega City One, a giant city with some 800 million residents and a whole lot of crime. Dredd is a Judge, basically police that are able to execute criminals in the field. He is set to test a rookie, Judge Anderson, played by Olivia Thirlby (Juno) in the field. During a homicide call, the two judges get trapped in a giant skyscraper by an evil gang lord that controls the territory. The movie is pretty action-packed from beginning to end and a deliciously self-aware script. With a budget of about $45 million, it is surprising that Lionsgate didn’t try to market it better. It is a shame really, and part of the reason we recommend it to you now. Go see it!