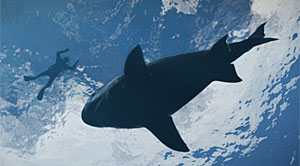 Courtesy of multi-national video game developer, Rockstar Games, Santa has stopped by ahead of Christmas schedule this year to deliver five new screenshots for the next entry in the GTA franchise, Grand Theft Auto V.

What makes this gift that much more awesome is that the screenshots give you a preview to three new protagonists, jets, submarines and a frigging shark. Yes a shark! How sick is that? I guess Rockstar wants to make you think twice next time before taking a nice cold dip in GTA V.

In addition, we have some good news for PC gamers who have doubt a PC version is coming out anytime soon. While Rockstar Games only had the intention to focus on the console version during their announcement of GTA V, it appeared that Amazon listed the PC version for pre-order along with the Xbox 360 and PlayStation 3 version. The listing has been taken down recently from Amazon requested by Rockstar due to the number of reports announcing this leak.

GTA V still doesn’t have an official release date set, but the game is expected to hit store shelves for Spring 2013.