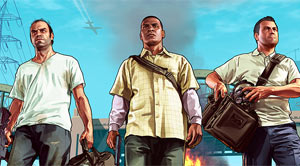 Skulls out
of five

By now, most people have probably read something about Grand Theft Auto V. Maybe a review or a description, either way, you’d have to be living under a rock to not know about Rockstar’s new magnum opus. The game has already set some seven different world records, received amazing praise, and basically been plugged by every source on the Internet.

So, what exactly sets this review apart? Not a whole lot exactly, but instead of racing to finish Grand Theft Auto 5, I decided to really take some time with it, to get not only an initial reaction, but a long-term reaction as well.

Expectations for this game were high, not only from a universal standpoint, but also from an individual’s personal standpoint. The last time I had hopes this high for a game, was probably Grand Theft Auto IV, or maybe even Red Dead Redemption. My point is, this is Rockstar, and Rockstar is simply held to a much higher standard than most other companies, but this praise is well deserved. Unlike something like Call of Duty that comes out annually, Grand Theft Auto, or Rockstar in general, takes multiple years on a given project. This is the first and foremost thing to know about Rockstar, they always take it to another level.

What are the limits in the GTA V world?

After popping in the first disc, I waited patiently for this gargantuan to start. Though, nothing would prepare me for just how massive this game would actually be. I don’t think I ever had this problem before, but stepping into Los Santos for the first time is almost overwhelming. In fact, each time I turned the game on after that, I would take about 5 to 10 minutes just to figure out what to do. Should I steal a car and drive around the countryside? Jump straight into some story missions? Do some side quests? Play golf? Tennis? Cause mayhem?

The possibilities in this game are practically endless, but just hopping in a car and driving around is, in itself, something to marvel at. Streets actually feel properly scaled, which is pretty much a first for this series. It would probably take me the same amount of time to walk to my own street corner, as it would to have Franklin walk to his street corner. I can’t even imagine how long it would take to walk from one side of the map to the other. Certainly a long time.

In this sense the game reminds me heavily of Skyrim. If I see some mountains off in the distance, all I need to do is find a way to get there. Nothing appears to be off limits, even swimming to the end of the ocean is perfectly doable, if you have the desire. Freedom is certainly nothing new for the Grand Theft Auto series, in fact, the games have been built around the concept, but GTA V makes previous installments look like boxes, trapping us inside.

How are the NPCs more lifelike?

Los Santos is one of the few gaming worlds I’ve played in that actually feels completely open. Of course the game has limits, but they are so spread out that it makes it totally irrelevant. Not only do I, as the player, have freedom, but even the NPCs feel more lifelike. I can recall being blown away by how “alive” Liberty City felt in GTA IV. Well, GTA V makes the NPCs from that generation look like a bunch of brain-dead zombies. Not only do they seem freer, but they are also less repetitive. For the most part, I never see the same reactions twice when nearly running someone over or pulling a guy from his car. The sheer variety of the background is a marvelous achievement and it’s certainly going to set a new standard for this upcoming console generation.

How have gameplay and menu systems been improved?

Now let’s get down to the brass tacks. In terms of the story and gameplay, the changes are more subtle. Most veteran GTA players should feel right at home with a similar control setup to previous outings. One upgrade that I noticed and loved immediately was finally using radial menus for guns, radio stations and what not. Everything feels much more on-hand, and it makes you wonder why this way of doing things hadn’t been implemented before. Shooting, running, swimming, they all feel about the same as in previous GTA games, just tighter, as to be expected. One of the bigger differences to the core gameplay was the driving overhaul. Cars feel more individual than ever before, and driving as a whole is just easier/more fluid. Also, choosing the right car for your mission becomes an important factor. You don’t want to try getting away from police in a pickup truck or crappy bucket mobile. Personally I like the Mercedes and Audi knockoffs, but everyone has their personal favorites.

Meet the characters of GTA V after the jump…