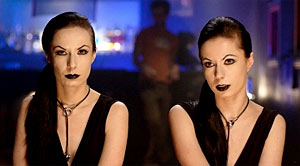 Meet the Twisted Sisters (aka, the Soska Twins; aka, Twisted Twins; aka, Morally-Corrupt Underground Degenerates; aka, Jen and Sylvia Soska), two of horror’s most promising prospects. Together they write and direct visceral, intelligent, thought-provoking (if you’re capable of seeing their vision), and bloody awesome films with titles that sell themselves. Seriously, who doesn’t want to see Dead Hooker in a Trunk? Actually, who doesn’t want to see a dead hooker in a trunk? All rancid with gaping maggot-infested wounds?

The twins’ latest film, American Mary, was most recently screened at the Whistler Film Festival, and while we weren’t there to witness the repulsed audience slip on their own vomit as they ran for the exit during the screening of the film, we did see it, review it, and interview the sisters.

First and foremost, I have to apologize for the poor quality of the audio. To compensate, I’ve provided (below) brief explanations of the conversation for those shitty moments when it gets especially difficult to hear.

What’s refreshing about the twins and Twisted Twins Productions is the fact that, in an era of endless remakes and half-baked ideas, they’re making original movies that satisfy the visceral junkies and the more pensive types. These third-wave feminist chicks sure know how to make a decent flick and certainly have a future in the genre, if they don’t screw the pooch.

At the very beginning, Jen is basically saying that the Whistler Film Festival was trying something new with a midnight showing and it was the first time that the festival showed a horror film.

18:35 Sylvia and Jen are discussing their sensitive skin and how their back piercings and laced up backs in the film are actually prosthetics instead of the real thing. Because of their sensitive skin, the piercings wouldn’t have looked good on film. From there, they go on to discuss why their small roles in American Mary mark their retirement from acting.

20:12 Sylvia chimes in to say that there’s also no role for them in their upcoming monster project, Bob.

22:35 Regarding the new project, Bob will make an adorable plush.

25:03 Sylvia is promoting their comic book collaboration with First Comics.