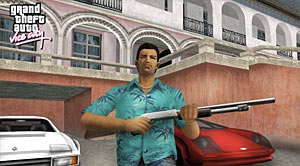 In a recent interview between content publisher, Digital Trend, and Grand Theft Auto producer Leslie Benzies at Rockstar North on the future of the series, Benzies talked about a dream of combining all of the cities from previous GTA titles in one big open world. According to her, the player would be able to “fly” between each city, and re-experience favorite areas from San Andreas, Vice City, Liberty City Stories, and so much more.

“Of course, at some point we would like to have one big world containing all our cities, and let the player fly between them and revisit their favorite areas; and in that context, re-imagining Vice City would be very interesting,”

In the interview, Benzies also addressed the challenges of creating mature content based on violent places in everyday life.

“I think the scrutiny we suffered … has helped keep us creatively sharp. We do not sit down for design meetings and say ‘let’s make the most appallingly violent game possible’. We choose to set our games in places where violence is, or was a part of everyday life: the Old West, or the criminal underworld, or cocaine-flooded Miami. If we censored ourselves and sanitized the violence, we would not be able to properly explore these settings and themes, and make the games we make. That is a compromise we have never been willing to make.”

On last note, Rockstar Games is planning to re-release previous titles on tablets and mobile devices sometime in the very near future, but none have been confirmed yet.