History Will Be Made At UFC 157: Ronda Rousey Vs. Liz Carmouche 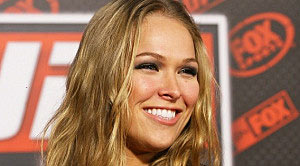 History will be made on Saturday, Feb. 23 at Honda Center in Anaheim, Calif., as the Ultimate Fighting Championship will present its first women’s bout featuring UFC women’s bantamweight champion Ronda Rousey defending her title against top contender Liz Carmouche.

Rousey, a former Olympian and native of Southern California, is unbeaten in her pro career at 6-0, with all of her wins coming by way of submission. In her first UFC title defense she’ll meet Carmouche, a 28-year-old U.S. Marine from San Diego who has built a reputation for her power and grit.

“Ronda is the real deal,” UFC President Dana White said. “She’s nasty. She’s mean. She’s like Chuck Liddell. She goes out there and tries to finish her opponents. And Carmouche is tough as nails, too. She was a Marine and she’s got great ground-and-pound. I look forward to having the women join the UFC.”

In addition to Rousey-Carmouche, former world champions Dan Henderson and Lyoto “The Dragon” Machida will collide with the winner likely to earn a light heavyweight title shot. Henderson, a former PRIDE and STRIKEFORCE champion, last defeated Maurico “Shogun” Rua in what many consider to the best fight of 2011. Meanwhile, former UFC light heavyweight champion Machida knocked out Ryan Bader in August and now has his sights set on a battle with “Hendo.”

Also on the card is an exciting bantamweight contest between former WEC champion “The California Kid” Urijah Faber and Ivan Menjivar. The two fought in 2006, with Faber scoring a disqualification victory. Now the two meet again with a chance to propel themselves into title contention at 135 pounds.