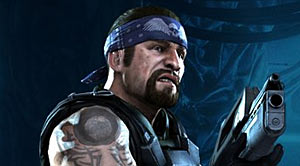 Not too long ago we featured the “survivor” multiplayer trailer for Aliens: Colonial Marines, a mode that pits four controlled marines against a horde of acid-dripping Xenomorphs until the last standing survivor. Today, we now have official character details of those controllable marines unveiled by the legendary video game publisher, SEGA.

You can read each of the marines profile by clicking on the images below of Peter O’Neal (Private), Bella Clarison (Private), Christopher T-Winter (Corporal), and Jeremy Cruz (Leutenant).

Aliens: Colonial Marines is still in development stage by Gearbox Software (Borderland 1-2, Duke Nukem Forever) and is slated for February 12, 2013 for the PlayStation 3, Xbox 360, and Windows PC.