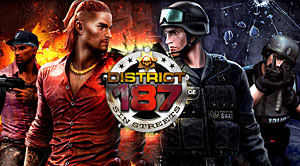 When committing to anything that would take longer than five minutes’ time, I find it important that we ask ourselves the simple question, “Why?” “Why should I sign up for polo lessons?” “Why go to the zoo to make fun of the baby gorillas?” “Why should I tie up and gag my grandmother, and carry her around in a gym bag?”

With a little deliberation, you can use this process to streamline your life.

So, with today’s review of District 187, I think it’s important that you ask yourself why you would take the time to play this game. Maybe if we delve into the details, we can justify that shiz.

As a generic FPS, it’s pretty straightforward – you got your team deatchmatches, you got your capture the flag, you got your “detonate the bomb” settings, all to satisfy your blood-baring needs. Everything is cut-and-paste, so you’re delving into familiar territory.

The same could be said, with regard to characters and character models. The game’s set in a Cops-vs.-Robbers-type atmosphere, with both sides comprised of the same character build, albeit, with different colors. A mediocre customization option is employed, but it doesn’t really stretch any further than giving your guy a shiny pair of aviators or switching out his cornrows for a hat. On the plus side, there are a couple outlandish duds you can pick up (a troll-face mask that’s for some reason titled Grendel mask, for example). But as it stands, your options to let your freak flag fly are inherently limited, so here’s hoping that the devs’ll patch that up for the sake of us artist types.

“I’ll customize my character to look like a massive tool.”

The in-game clothes are purchased through small portions of gold – a small reward for shooting your opponents in the face. For signing up with the open beta, NetMarble seems to give all players somewhere around 30,000 gold pieces, so you’re left to customize to your heart’s content, upon arrival.

Customizations extend to your weaponry as well, but you can only own what you’ve purchased for limited amounts of time, a la Combat Arms. Truth be told, I suppose “renting” would be a better way of putting it. It’s an incentive to keep players playing, all the time and keeps a steady balance. Still, I can imagine some people just aren’t into that sort of thing. As a permanent option, you could always slap a bad-ass decal on your gun, but some people might just laugh at you because, well, you went and slapped a decal on your gun.

Continue reading the District 187 review after the jump…