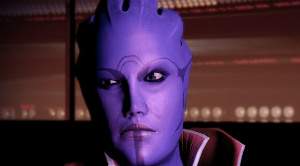 Yellers! Are you ready for some good ol’ Mass Effect 3 news? I’m sure you have heard about the new Omega single-player DLC coming out, which Bioware has recently confirmed. It’s the biggest and baddest Mass Effect 3 DLC ever pushed out by the company. And from the sound of the game details, you just can’t go wrong with an action-packed DLC priced for a measly $14.99 on the PlayStation 3, Xbox Live, and Windows PC.

Since Bioware is capitalizing on the size, which is twice as big as the previous DLC released, the extra content promises to deliver a new set of weapons to your arsenal, new characters including a Turian female leader named Nyreen Kandros, and lots of enemies to your disposal. The rest of the game will be yours to discover beginning tomorrow, as it will be up to Aria T’loak and Commander Shepard to take back Omega from the Illusive Man.

Today, Bioware has launched a trailer for the Omega DLC in anticipation of the official release tomorrow, and it’s reported that a live demo will be streaming live at 1:30 p.m. PST.