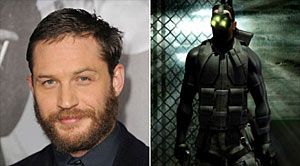 It’s been reported by various sources that Tom Hardy (Bronson, Inception) has signed up to play Sam Fisher in the upcoming Splinter Cell film, the lead role in Ubisoft’s second film adapted from a video game franchise. Michael Fassbender was the first high-profile actor picked up to star in the Assassin’s Creed feature film, and it now appears that Hardy is confirmed as the protagonist, a highly-trained agent (Sam Fisher) of a fictional black-ops subdivision within the NSA, in Splinter Cell.

The Splinter Cell film has been in the works since 2006. While there’s not a major studio attached to it yet, we can confirm that Eric Warren Singer will write the script.

Stay tuned to Yell! Magazine for more progress updates on the Splinter Cell film, as well for the next entry in video game series titled Splinter Cell: Blacklist that is scheduled to be released in spring 2013.